I Became the Male Lead’s Sister 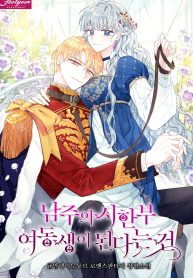 Evangeline, who was reincarnated as the male lead’s younger sister, only had one year left to live. While her lovestruck pathetic brother followed the heroine to the ends of the earth, she decided to find the man of destiny who could save her.  The only clue Evangeline was given was that he was blonde. With a plan in mind, she snuck out the mansion in anticipation of finding him. But somehow, things began to move strangely. Instead of fate, she kept running into a brown-haired boy who smelled fishy. “Will you take responsibility for my first time?” he said. He was too handsome to be a supporting character, Evangeline thought. Was he the emperor? Or a crook? There’s no way the author would give such beauty to a supporting character of a novel. He’s definitely the other male lead… the emperor. “Are you the emperor?” Evangeline asked with confidence. “…No.” If not, then nevermind… but why was he so dazzling? While agonizing in such thought, she was swept away by him. “Wait, I don’t think I can. This feels weird.” “Is it strange to feel good?” “It’s weird.” “Why don’t you like it when you feel good? Can’t you just keep feeling good?” Nevermind. She decided to rest in peace. She wasn’t interested in magic, nor men, nor did she want to recover the memories she’s lost. Just… let her die comfortably! But… this annoying man keeps involving himself with her… even brought a dog leash… Show more

When A Snail Falls in Love

Stubborn Love of a Roguish Scion