I Only Know Forbidden Spells 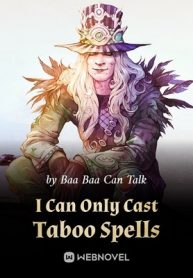 You’re Reading “I Only Know Forbidden Spells” Novel at WuxiaWorld.Site Lin An transmigrated to a world of sword and magic, becoming an apprentice in an academy of mages.
In this world, there were swordsmen who could cut a mountain in twain, wind mages who could summon the winds of the world, fire mages who incinerated worlds, and summoners who could call upon demon gods across the world. While Lin An was left at a loss of what to do next, he suddenly awakened the Forbidden System—as long as he had enough points, he would be able to redeem forbidden spells from the System. Hence, a mage apprentice who could only cast forbidden spells was born. His Armageddon left the whole world in shock and awe. His Undead Prelude summoned a legion of undead. His Earthen Wrath left the ground shaking. His Wind God Prelude buffeted the world in windstorms. He was Lin An, a mage apprentice who wielded forbidden spells and left everyone shaking in their boots. Show more

Side Character Transmigrations: The Final Boss is No Joke