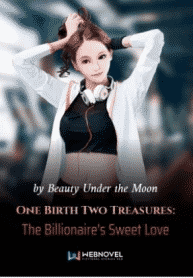 One Birth Two Treasures: The Billionaire’s Sweet Love Average 4 / 5 out of 1

She became a surrogate mother in exchange for over a million yuan. As the esteemed CEO of the most powerful Empire in the capital, he holds absolute power, while she is just an adopted daughter to a family of lowly status. She agreed to bear him his offspring, simply because her adoptive father’s business was failing. On the day of her delivery, the elder brother was born healthy, but the younger one was stillborn. Having fulfilled the contract, she disappeared from his sight along with the astronomical sum of money. Six years later, he is still that arrogant and high-profile CEO. When she accidentally gets embroiled with him again – like a canary trapped in his cage, he closes in on her. “Woman, do you think you can escape from my clutches?!” However, he does not expect a little kid to interfere; the boy pompously points his little finger at him and warns, “Mu Yazhe, you’d better leave her alone! She’s mine – this baby’s woman!” The man is alarmed, simply because the little kid’s facial features are identical to his… Tags: Adorable Child, CEO, Sweet Romance, Scheming, Wealthy Aristocrats, Fluff, Two-faced, Child, Rich and Powerful, Treachery Disclaimer: Neither the picture nor the content belongs to me. They are uploaded here, not for any bad purpose but for entertainment only. Disclaimer: If this novel is yours, please let us share this novel to everyone else and send us your credit. We display your credit to this novel! If you don’t please tell us too, We respect your decision. Show more

Bigshot, Your Wife Is With Her Tarot Cards Again!

I Lost the Leash of the Yandere Male Lead