Real or Fake Missy : Female Side Boss Character Does Not Want to Die 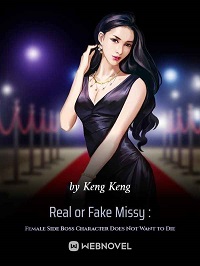 Real or Fake Missy : Female Side Boss Character Does Not Want to Die Average 4.2 / 5 out of 5

You’re reading Novel  “Real or Fake Missy : Female Side Boss Character Does Not Want to Die” on LISTNOVEL.COM Status in COO:Chapter (Ongoing) Synopsis Shen You is a real daughter. When she returned to the Shen family, she realized that the Shen family was biased towards the fake daughter. They always said that Shen You was not as elegant and kind as the fake daughter Shen Jiao.
Even if Shen You did not fight for it and only wanted to gain the recognition of her family, they believed that Shen You was fighting with Shen Jiao. Until Shen You died of a terminal illness. At this moment, Shen You realized that she was living in a novel. Shen Jiao was the real lucky female lead in the novel, while she was just a supporting actress with a tragic ending! Shen You, who had been reborn through the system, decided not to care about her family anymore. She wanted to stay away from her fiancé, Zhao Nan, who hated her. She immediately packed her luggage and left.
But after she left, her cold parents, her brother who hated her, her hot-tempered brother, and her fiancé, Zhao Nan, who was used to being pestered by Shen You, all felt uncomfortable? In order not to get terminally ill again, Shen You had no choice but to follow the system’s tips and try her luck with Young Master Huo. Every time this young master saw her, his face was so red that it was about to bleed, yet he still had to pretend to be cold. “Can you stay away from me and not always stick by my side?” Shen You nodded and left. She was going to take advantage of other people’s luck.
At a cocktail party, her fiancé saw the beautiful Shen You and took the initiative to strike up a conversation with her. Unexpectedly, she rejected him coldly. Zhao Nan was about to pester Shen You when he was stopped by Master Huo’s bodyguards. At that moment, Young Master Huo was walking over from the banquet hall’s entrance. He grabbed Shen You’s wrist and finally lowered his noble head. “I thought you wanted to pursue me, but you just wanted to take advantage of my luck. That’s why I was a little angry before.” “From now on, I’ll let you stick to me, okay?”
Show more