The Record of Unusual Creatures Comics 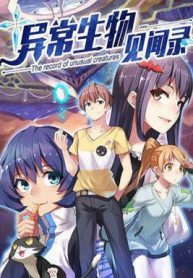 N/A, it has 9 monthly views

You’re Reading “The Record of Unusual Creatures” Comics at WuxiaWorld.Site
Hao Ren (literally means “good man”), as his Chinese name suggested, is a good man, and his ideal was to live a restful, comfortable life as a landlord. At least that was his plan before a couple of abnormal creatures rented his house. A remote, outdated big apartment, a bunch of rather abnormal non-human creatures, and a labor contract from the “god”, the three factors combined lead him to be the busiest landlord and most supernatural “babysitter”. The story of the most complicated, erratic and abnormal landlord and tenants started from here. “Ever since I put my fingerprint on the labor contract, I knew I was roped into something terrible…” As a person who is down-to-earth as well as a good Samaritan, Hao Ren desires to live the rest of his life as a benevolent landlord. Stumbling into a curious yet mysterious lady, he began his journey of “collecting” abnormal and supernatural tenants. His life only became more chaotic when he receives a labor contract from “God”. Discover the many races, myths and worlds that lie beyond what humans define as normal! This bizarre fantasy full of fun is sure to bring you on a crazy rollercoaster of emotions! Show more

I’m Sorry I’m Not Qualified to Be Empress

Rebirth Of The Apocalypse Queen: On Your Knees, Young Emperor!

My Master Disconnected Yet Again

WebComics
We use cookies on our website to give you the most relevant experience by remembering your preferences and repeat visits. By clicking “Accept”, you consent to the use of ALL the cookies.
Do not sell my personal information.
Cookie settingsACCEPT
Manage consent